Salami and Leadership – What’s the connection? What’s the connection between salami and leadership? This month I asked our guest blogger Guy Fielding, NML17 graduate to reflect on his leadership journey and how the learning’s from NML helped him to establish and grow a very successful salami festival in his home town.

“I’ve been searching for the meaning of life. So far I’ve discovered I LOVE SALAMI.” Source: Unknown

Upon reflection on my leadership journey as a participant in the Northern Mallee Leadership Program in 2017 I am very humbled and proud of what I have been able to achieve since then.

Two big milestones in particular, worthy of mention, have occurred:

Many times I have been asked, “Why or what made you consider a salami festival for a community project?”

The background of the community project dates back to my arrival to the Northern Mallee region almost 12 years ago, in January 2008. I was fascinated by the number of families that traditionally made salami every June/July (mostly over the June long weekend). I have been informed that many families have been making salami with strongly-guarded traditional recipes and methods that have been passed down through many generations for decades. Similar to most families gathering at certain times of the year for planned festivities, namely Easter and Christmas, this was another celebration on the annual calendar that would bring family together.

What better way to bring all of our community families together than with a festival to celebrate their creations. The festival is an opportunity for all community members to experience a taste of what our salami making families create each and every year in an atmosphere of togetherness.

The inaugural event took place last year and many of the leadership traits, taken from my learnings from the themed session days of the leadership program the previous year, were utilised in bringing The Great Murray River Salami Festival to life. Personal growth, professional development and networking are qualities I associate most with my continuing leadership journey and my experience with developing this community project.

As mentioned, The Great Murray River Salami Festival is an event aimed at showcasing the local community of Euston Robinvale and the heritage of the region via honoured family traditions of salami making.

The October event combines a salami competition with a festival atmosphere that includes food and beverage vendors, market stalls, entertainment, children’s activities and salami making/cooking demonstrations throughout the day.

Located on the banks of the mighty Murray River and utilising the grounds of the Euston Riverfront Recreational Reserve this truly is a unique event setting and an experience that the whole family can enjoy together, as one. 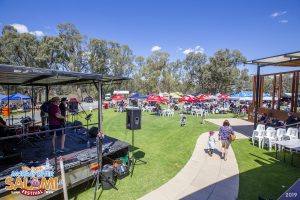 Having only just experienced our second Great Murray River Salami Festival, held on Saturday 12th October 2019, I have been overwhelmed by the positive response from everyone involved. So much so that it appears we have created an ongoing annual event that will only continue to grow and attract more attendance numbers in the ensuing years to come.

Attendance numbers last year were approximately 1,500, this year we had well over 2,000 people attend.

The salami competition attracted 39 entries last year, this year we had 64 entries compete for salami making supremacy and the $2,000.00 first prize! 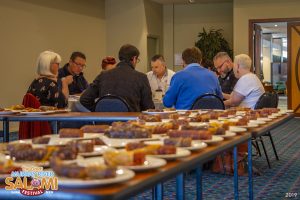 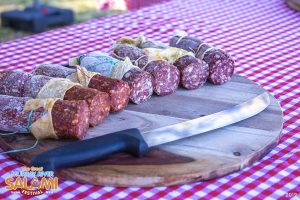 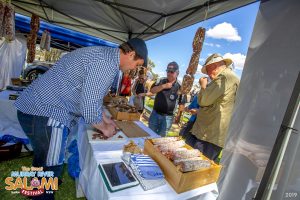 Sponsorship, monetary and in-kind support, also revealed an increase at this year’s event compared to 2018.

All in all what started as an idea, created from my participation in a leadership program, has blossomed into a magnificent ongoing community event. For this, I am extremely happy and most very grateful.

A theme from my 2017 leadership program year was being activated within our communities. This certainly is something I would urge all community members to take on board and really consider getting involved with. We can all be leaders, just have a go!

Thank you Guy for your insights and for the ongoing success of your salami festival.